TORONTO — Steven Matz had two out, the bases loaded, and a run already on the board as he reached back to throw his 50th pitch during the game’s second inning. It’s not what you want. Nor is the fact that pitch was fouled off, as was his next one, before Matz missed badly with a sinker in the dirt, walking in his second run in as many batters.

Such was life in the early going for Matz Wednesday night, as he consistently yanked sinkers glove-side, struggled to locate his curveball, and needed 56 pitches to record his first six outs, walking three in the span of four batters against a Baltimore Orioles lineup with MLB’s third-lowest OBP. But Matz has been here before. A couple of starts prior he was similarly pulling heaters too far outside the zone and made a simple in-game tweak to correct it, moving his starting position on the mound.

One problem: on Wednesday Matz started his outing there, having liked the way his fastball was playing from that lane. But the left-hander and Blue Jays pitching coach Pete Walker had another adjustment in mind — this time mechanical — which paid off immediately as Matz retired the side on nine pitches in his third inning, struck out a pair in the fourth, and stranded a leadoff single in the fifth. Incredibly, on a night it looked like he might not get through two, Matz was heading back to the Blue Jays dugout after five having allowed only the pair he walked in.

That gutsy effort should have provided a strong enough platform for the Blue Jays to tidily dispose of the doomed Orioles, win a series, and rack up another win they desperately need. But you’ve watched the Blue Jays. You know it could never be so simple. And so, after Matz left with a two-run lead following the fifth, Tayler Saucedo coughed one up in the sixth and Joakim Soria allowed another in the seventh, as the Orioles tied the game.

Meanwhile, runners were stranded in Toronto’s half of the fifth and sixth innings, plus two more in the seventh. But Baltimore’s bullpen just kept giving Toronto’s glacial offence opportunities. And it finally took advantage of one in the eighth, as Bo Bichette led off with a single, moved to second when Teoscar Hernandez was plunked, swiped third on an Alejandro Kirk fly out, and raced home on a Randal Grichuk sacrifice fly. Not much, but enough, as the Blue Jays squeezed out a 5-4 win.

“In terms of the offence, we’re a balanced group that can do a lot of good things. But you have to understand, there’s a book on us now and they will attack us the way they think they can get us out,” said Marcus Semien. “It doesn’t matter how you get it done. We want to be a team that can win any kind of way. Early in the year, we had a lot of big blow outs. The run differential was huge. But none of that matters now. Getting the W, sometimes it takes a big play in the end. Sometimes you jump on them early. However we can do it, we’re going to do it.”

Five runs isn’t exactly the offensive outburst Blue Jays fans have been waiting for. But considering recent results, maybe it qualifies. Semien opened the scoring with his 33rd home run in the first, before Hernandez and Lourdes Gurriel Jr. each produced hits with runners in scoring position — imagine that — in the fourth, helping the Blue Jays plate a fourth run for only the third time in their last 13 games.

Meanwhile, Matz’s was the kind of find-a-way performance the Blue Jays have needed from their starters of late thanks to a slumping offence that once carried this team but has lately needed carrying itself. In the dozen games preceding Wednesday’s, Toronto was averaging only three runs a game. And five of Toronto’s six wins over the prior two weeks had come in games in which they scored three runs or fewer.

Those are incredibly thin margins to work with during the stretch drive of an already thin-margined season that sees the Blue Jays 4.5 games back in the AL wild card race with 30 to play. Assuming it will take at least 90 wins to qualify for the playoffs, Toronto can only afford 10 more losses. Preferably fewer. But it’s hard to avoid losses when you aren’t scoring.

And perhaps this rotation’s most underappreciated contributor is Matz, who posted the lowest ERA (1.30) of any MLB pitcher to throw at least 20 innings in the month of August. He begins the season’s final month with a lower ERA and FIP than Hyun Jin Ryu. A noticeably low .246 BABIP and 3.8 HR/FB rate over his four starts prior to Wednesday may suggest he’s been somewhat fortunate of late, particularly considering he’d struck out only 12 over that span. But the contact he’s been allowing has often been weak and on the ground, which is a fine way to generate the results he has. Quietly, consistently, unexpectedly, Matz has been giving the Blue Jays excellent results over the last 30 days.

“I was kind of battling myself a little bit today,” Matz said. “But I threw a lot of fastballs today and they didn’t seem to really be on them a ton. So, that’s an encouraging takeaway today. And I think fastball-changeup has really been the name of the game for me.”

Interestingly, Matz hasn’t been doing anything all that differently than he was earlier this season when he pitched to a 4.72 ERA over his first 15 starts, and a 5.77 mark from an arbitrarily selected 11-outing span stretching from late April through early July. Same pitch usage; similar amount of them located in the zone. If anything, his stuff has declined. The sinker that averaged 95-m.p.h. from April through July sat 93.9 through five August outings; the 86-m.p.h. changeup now coming out at 84. But the hard-hit rates on each pitch have decreased in turn, as has Matz’s xwOBA on those two primary offerings, the sinker in particular.

Turns out it hasn’t been a matter of how Matz is throwing, but where. Matz’s intention is to work up with his fastball and down with his changeup, playing with hitters’ eye levels and timing to generate whiffs and weak contact. Against right-handed batters, which have accounted for three-fourths of Matz’s plate appearances this season, he’ll try to keep those changeups on the outside edge, while attacking their back feet with curveballs to prevent them from hanging out over the plate.

But through the season’s middle months, Matz’s changeup — his curveball, too — was landing more towards the middle of the zone than the edges, which made it easier for hitters to fight off while setting their sights on his fastball, which was coming at them in a similar location. But since a rough outing on July 28 when he allowed five hits on his sinker, Matz appears to have rediscovered the feel for his changeup, throwing it more consistently towards the bottom of the zone and the outside edge, which has helped make his other pitches more effective.

On the left is where Matz was locating his changeup from May through July. On the right is August: 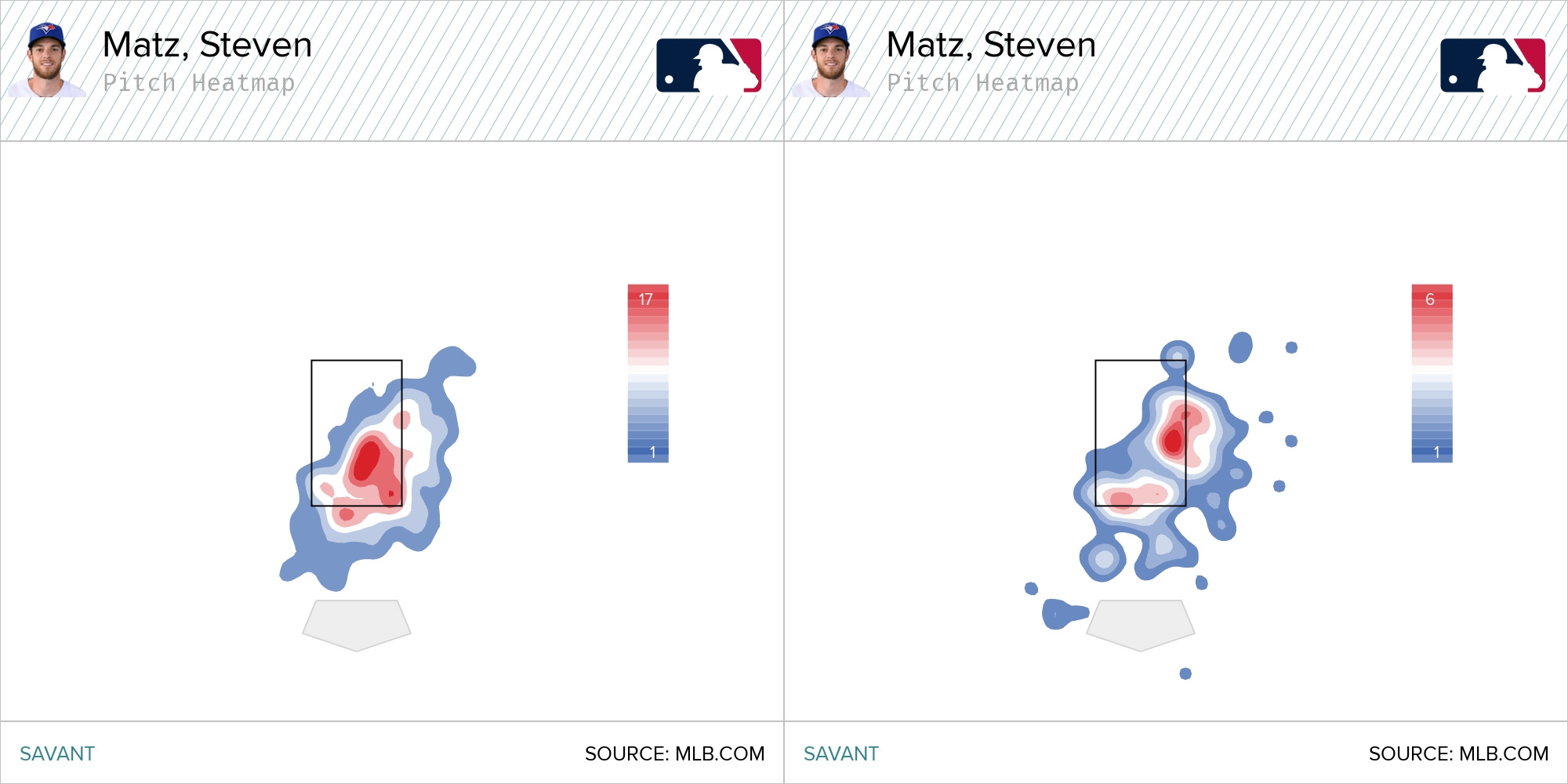 And Matz was similarly keeping his changeup off the middle of the plate Wednesday. The problem was pulling his sinker, a problem he quickly corrected after his first two innings, getting it back up at the top of the zone where it could effectively set up his secondaries. Presumably, the issue will be a focus heading into Matz’s next start, which could come in New York during a critical series with the Yankees.

“I was talking to Pete and Kirk and it was like, ‘stay to the fat part of the plate,’” Matz said. “I kept missing glove-side or shooting them arm-side off. So, we just worked back on the plate and tried to keep me on the plate. I wasn’t trying to be so fine with all of my pitches.”

Zooming out, a world in which the Blue Jays contemplate extending Matz a qualifying offer following the season is slowly beginning to materialize. It’s obviously a little early to say anything certain. We’ll see how he looks over the five or so starts he has remaining. But if they look anything like his last six? If Matz keeps churning through innings and pushing down that ERA? It’s not unfathomable that the Blue Jays would see the value in Matz at a $19-milllion rate next season.

Give Matz five starts at five innings a piece this month and he’d end up with just shy of 150 innings. And it’s not inconceivable that he could get his ERA down to near the 3.51 Odorizzi had in 2019. If those stars aligned, it would make for a fascinating case. And the Blue Jays would have to be prepared for the very real possibility that Matz accepted the offer, more than doubling his career earnings in one season and trying to re-enter the market as a 31-year-old the following off-season.

We’ll see. There’s a lot of pitches to be thrown. But that Matz has pitched himself even close to making it a discussion, coming off a 2020 in which he posted a 9.68 ERA and lost his rotation job, speaks to how far he’s come in a short amount of time. And, more broadly, how integral Toronto’s starting pitching has been of late, making the difference between a season with an incredibly thin margin and no margin at all.

Concern abounds for Blue Jays as Springer suffers injury in…