How masterful was Itoje’s masterpiece? The semi-final win over New Zealand


In my series, Bakkies Botha has so far set the gold standard for a grinder lock in one complete match: 1.1 involvements per minute in the brutally physical Rugby World Cup final of 2007, a quantum leap up from the best of 2020’s tighthead locks playing in the Tri Nations.

His positive-to-neutral ratio was still sky high, even with a full 80 minutes of Bakkie-ness. He hit rucks with sickening force. He stole lineouts.

He was surprisingly quick. And he ran down Matthew Tait after a 40-metre sprint, about one yard from the try line. He also kept negatives to a minimum. He was never penalised and only one per cent of his involvements put his team in a worse position.

So what of modern-day superstar Maro Itoje? In a prior article, I pointed out his lack of passion and action in a crucial period of the 2019 final against the eventual 32-12 winners, South Africa, in stark contrast to the courageously manic game of lock mate Courtney Lawes.

But perhaps the semi-final emptied his tank (and Lawes was subbed off at 54 minutes)? I took a look at Itoje’s performance in the famous ouster of the All Blacks: the first match Sam Whitelock had ever lost in a World Cup.

The first few things I must point out as a caveat are: (a) I am not free of bias against England (I don’t like them); (b) I am not fan of Itoje’s antics; and (c) my review confirmed he gets a lot of free publicity from commentators he has not earned (not just being named as someone who claimed a lineout that Lawes actually did, or being featured more, but also that every single time he does do anything normal, his surname tends to be bellowed out as loud as a ship’s horn).

But I am confident I watched each action objectively, and you can trust this look.

I am not sure he outplayed Lawes or Brodie Retallick, but he did completely outplay Sam Whitelock. He was not as busy as Botha, but more involved than hyperactive Matt Philip, athletic Guido Petti, and stodgy Rob Simmons.

Itoje had 72 total involvements in this game, at Yokohama, against the legendary lock mates Retallick and Whitelock, for a 0.9 actions per minute work rate.

He had big moments, but not as many as I remembered (only 21 per cent ranked as positive in my system, well below Botha, Petti, and Philip), and he does take a few minutes easy in the middle of chukkas, also more than I thought. Lawes out-chases and out-scrambles Itoje, as did George Kruis. But Itoje is a graceful big athlete, and sometimes his elegant actions look prettier than others do.

He sometimes switched off, as he did in the final, and during those times, he can seem petulant. His negatives (seven per cent) were more in the Scooter Barrett zone than the clean category of Simmons and Petti.

First chukka (11 involvements)
Positive: Itoje claimed a loose ball, ran a long way with it and recycled well, and also made a crucial seal of Jamie George on attack.

Neutral: He sealed a ruck, attended a ruck at 1:40 just before the English try, chased a kick to squeeze the angle, attended a couple more rucks, did a clean to keep a phase attack alive, and tackled Beauden Barrett.

Negative: He high-tackled Retallick and was pinged.

Second chukka (eight involvements)
Itoje stayed lively, but play did not come his way as much in these ten minutes.

Positives: He counter-rucked and stole a ball at 12:30. He swallowed the ball as he swam through an All Blacks maul at 18 minutes.

Neutral: He tried a couple more counter-rucks, tackled Retallick legally, lifted Lawes into the stratosphere at a lineout, and created a long frame for a box kick.

Third chukka (ten involvements)
Kiwis like Aaron Smith and Retallick were clearly breathing heavily by this point in the English barrage.

Positive: Itoje made a very strong carry over the gain line at 22:37, and stole a lineout off Kieran Read at 27:48.

Neutral: He took a couple of uncontested lineouts, joined three rucks in 13 seconds, contested a lineout and almost got it, tackled Jack Goodhue, and finished the chukka with another counter-ruck.

Fourth chukka (seven involvements)
A 2:07 scrum took a lot of time from this chukka.

Positive: Itoje cleaned Ardie Savea off a ball, when he had two hands on it at a breakdown.

Neutral: He took a lineout in two hands, steered a maul that got stopped, attended two rucks to build a box, and mauled.

Negative: He lost a lineout to Read, when he could have done better.

With 38 involvements in the first half, a dominant period for England, Itoje did a good job.

Fifth chukka (11 involvements)
This may have been his best period of play.

Positive: He pilfered a ball at 43:58, dampening All Blacks hopes. He made a half-break on a carry at 47:45. He won a bouncing loose ball in general play to end the chukka.

Neutral: He attended four rucks, took a no-contest lineout, steered a maul which led up to the near Ben Youngs non-try, contested a box kick, and counter-rucked before the 47:20 Tom Curry turnover.

Sixth chukka (ten involvements)
Lawes went off after four minutes in this period. Itoje seemed to change roles a bit, to carry more, and it did not go as well. 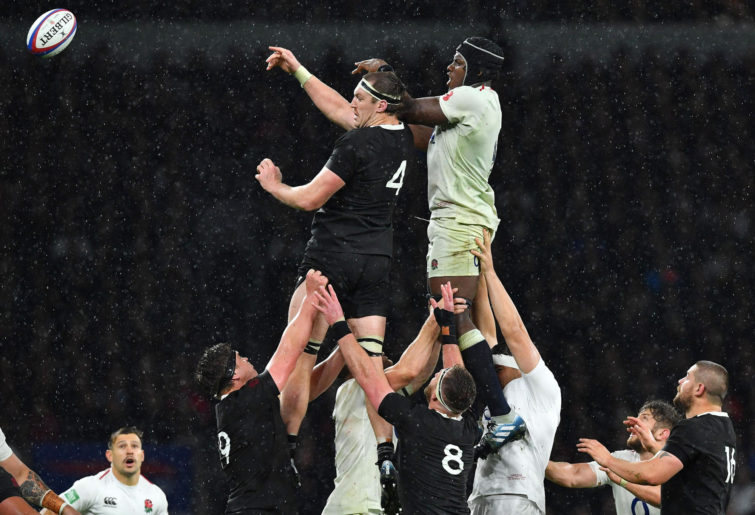 Neutral: He took two free lineouts, steered a maul, tackled Sam Cane twice, as well as a stationary Barrett, and made a short carry.

Negative: He got rocked in a negative carry, halting English momentum at 51:10, missed a cleanout on Savea, and missed the lineout on which Savea scored, because Read won the hand-fight with him.

Seventh chukka (nine involvements)
Positive: Itoje decimated Whitelock in a tackle at 65:03 and it spelled the beginning of the end for the old Kiwi warrior, and took a tough lineout ball in traffic.

Neutral: He attended rucks, made a tame cleanout, set up box kicks with his long leg, made a short carry, made a normal tackle, and helped drive a maul.

Positive: He made a great open field tackle on Sonny Bill Williams, made an athletic cleanout, and ankle-tackled Williams again.

The scary thing about Itoje is he has not yet found his ceiling. He may end up conquering his attention lapses, and add a bit of heft to help him clean and carry in the tight-loose better.

Just from this match, and knowing about his final performance the next weekend, we are looking at 85 per cent of what he can do.

How many goals will Brock Boeser score this Season? | Over/Under Canucks Edition